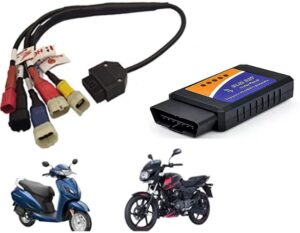 OBD2 elm 327 Cable all-in-one coupler BS4/6 is an improvement over OBD-II in both capabilities. It is also standardization.

In OBD2 Bike Scanner Cable BS4/6  OBDII Connector standard specifies the type of diagnostic connector and its pinout, the electrical signaling protocols available, It also messaging format. It also provides a candidate list of vehicle parameters to monitor and how to encode each data. There is a pin in the connector that provides power for the scan tool from the vehicle battery, it also eliminates the need to connect a scan tool to a power source separately.

Female OBD-II connector on a car Female OBD Connector connector pinout – front view. The OBDII specification provides for a standardized hardware interface—the female 16-pin (2×8) J1962 connector. Unlike the OBD-I connector, which was sometimes found, under the hood of the vehicle. It is also required to be within 2 feet (0.61 m) of the steering wheel. used in Honda, Suzuki, Yamaha, Bajaj, TVS, KTM, Hero, Royal Enfield bike Scanner OBD Cable bike Scanner.

The amount of diagnostic information available via OBD2 Bike Scanner Cable BS4/6  OBDII has varied widely since its introduction in the early 1980s versions of on-board vehicle computers.

That is your car telling you there is an issue. If you visit a mechanic, he will use a diagnostic to detect the issue.

To do so, he will connect the OBD2 reader to the OBD2 16-pin connector near the steering wheel.

This lets him read OBD2 codes aka Diagnostic Trouble Codes (DTCs) to review and troubleshoot the issue.